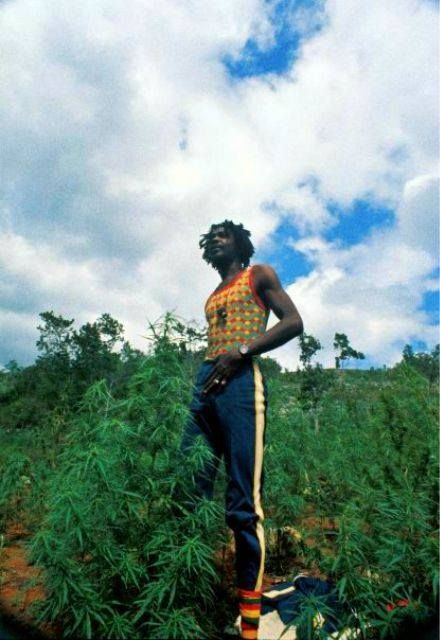 None other than Bob Marley himself explained to High Times about ‘Lamb’s bread’ and what this name really means.

Bob Marley: One time I was in Jamaica, was doin’ a show, an’ a man come up to me, and he gave me a spliff. Now, das de bes’ herb I ever smoke. Yeah, man! Neva get an extra herb like dat again! No, no, no. Just like one tree in de earth, y’know?

BM: Jus’ one tree. Sometimes ya just find a tree. It Lamb’s bread.

BM: De ability what de herb ‘ave ya call Lamb’s bread. Some a dem ya call Bethlehem’s bread. Dat is when ya really get good herb, y’know what I mean?

‘Lamb’s bread’ is a Rasta epithet for good ganja – ‘extra herb’. It’s rooted in an understanding of cannabis as a sacrament. Pretty likely names such as this are as old as Rastas themselves. The Lamb here is Jesus, the Lamb of God (Agnus Dei).

Seems the idea ‘Lamb’s bread’ is or was a specific strain is yet another example of how decades of modern hybrid and seedbank culture have totally skewed people’s perspective on traditional cannabis cultures. When even seed outfits that present themselves as being about respecting those traditions seem determined to shoehorn everything into the seedbank / strain menu / dispensary preconceptions brought to the table by Westerners and youngsters, misconceptions such as this are unlikely to be going away anytime soon.

For a sense of how far gone things already are, even enlightened souls like Amanda Fielding of the Beckley Foundation are penning nonsense for the press about “the famous Jamaican strain ‘Lamb’s Bread’, which was named after Bob Marley’s song, but is actually a product of hybridisation with “Skunk#1” imported from Holland in the late 70s early 80s.”

If there’s a track with that name by Bob Marley, it’s news to me. Far as I know, the original Lamb’s Bread track is a composition by Glen Brown. So far as strains go, there’s no chance ‘Skunk No. 1’ seed was coming from Holland to Jamaica in the late 70s or early 80s, because ‘Sam Skunkman’ didn’t bring his and Mel Frank’s strains to Amsterdam until c. ’84 to ’85. And Lambsbread was never a strain anyway.

For the Biblical origins of this ganja epithet, this is the verse that gets referenced by aficionados. I strongly doubt this in fact a source, but I imagine Rastas who could settle this give the Internet a wide berth.

Leviticus 23:18 – And ye shall offer with the bread seven lambs without blemish of the first year, and one young bullock, and two rams: they shall be for a burnt offering unto the Lord, with their meat offering, and their drink offerings, even an offering made by fire, of sweet savour unto the Lord.

Far more likely, the Christian Eucharist (Holy Communion, Mass etc.) itself is most important here, rather than this verse. The name Lambsbread is all about cannabis as a sacrament.

As for ‘Lamb’s breath’, chances that’s of Caribbean origin are zilch. ‘Lamb’s breath’ boils down to nothing more than some folks having a bad ear for other people’s accents.

The photo shows Peter Tosh in a field of what appear to be real Caribbean ganja domesticates. My impression is that hybrids didn’t start to trash Jamaican biodiversity comprehensively until commercial indoor cultivation took the UK by storm around the turn of the Millennium. Tosh died in 87, so it’s very unlikely the plants pictured have been affected by Indica-type plants.

According to Jamaican scientist Machel Emanuel, ‘The island of Jamaica has been impacted by hybridisation over the past 30 – 20 years.’ This fits with my own experience of visiting the region in the early 90s, when Kingston was the only place I encountered modern hybrids (‘chronic’). Elsewhere, in places such as Guyana, all I saw was real traditional ganja. Anecdotally, authentic Caribbean herb was also available in the UK and Canada until c. 2000, after which imports from Jamaica quickly turned to trash.

‘Proving’ authenticity in such a situation – i.e. decades after the event – is of course impossible. But overstating how early or extensively modern hybrids impacted regions of traditional cultivation and biodiversity has been the status quo. Experts too often do this or give flimsy claims undue credence.

Regarding places I know fairly well and firsthand – i.e. Asia – the widespread claim that landraces (ie, traditional domesticates) were all wiped out at source decades ago is typical of Westerners having zero grasp of places such as the Hindu Kush, South or Southeast Asia and instead relying on hearsay and factoids. Few folks writing about landraces understand these regions or cultures in anything like enough depth to support their grand proclamations, never mind whether they’ve ever even been there. To those of us who’ve lived or were born in these places, that much is painfully obvious.

Asserting that landraces are long since extinct at source  – as a number of experts have done, clearly without actually knowing this to be the case – is pretty irresponsible, even more so when its part of a corporate dupe of the unsuspecting or clueless.

So much of what’s happening these days in so-called ‘Cannabusiness’ – whether it’s expos, forums, and so on – is about deeply cynical, greedy people corralling stoners, feeding them crap, then milking them for money. All about the silver and gold, in other words – and as any real Rasta could tell you, that’s utterly antithetical to the meaning of real Lambsbread….