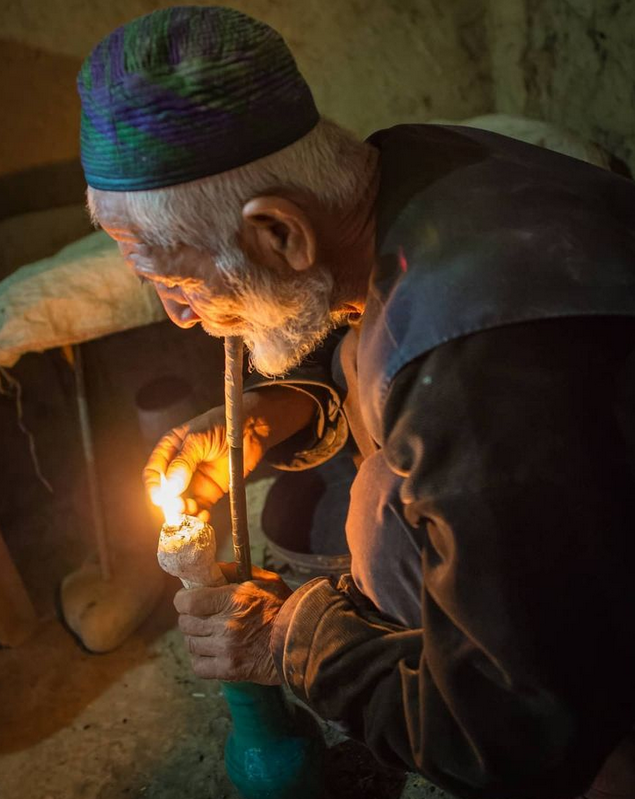 Afghanistan: Fortress of Cannabis – a wonderful photography book by Lucas Strazzeri that documents his winter 2018 journey through Balkh Province – is now available as a hard copy or e-book.

Lucas and I first met in 2007 in Peshawar, when I was on the first plant hunting trip for this website. These were times of high paranoia, not just from relentless consumption of epic quantities of fine hashish but with Pakistan itself in total meltdown, the once idyllic Swat Valley already fallen to the psychopathic Tehrik-i-Taliban, and militants apparently on the brink of seizing the Grand Trunk Road beyond Peshawar, thereby cutting supply routes to western Isaf forces in Afghanistan. Rumour had it that after escaping Afghanistan through the mountains of the Chitral Hindu Kush, Bin Laden himself was even now in the country.

This was the talk that swirled around endless joints and chillums of Balkhi charas at the notorious, now-closed Tourist Inn Motel of Bahadur Khan, an irascible Pathan, blind in one eye, whose family had migrated from northern Afghanistan to Peshawar in the 1970s. Arrayed around the beat sofas and low tables were a dreadlocked Polish anarchist, an Estonian photographer, taciturn Japanese hippies, a wasted French Sufi…. Bahadur Khan did his best to scare the shit out of all of us while keeping up a supply of delectable Afghan charas and assuring everyone they were safe provided they didn’t venture beyond the walls of his compound ‘motel’. To drive the point home, after dusk he would make a show of unbolting the front gate to returning guests while slung with a belt of shotgun shells, a clockwork sawn-off in his hand. Agents from ISI, Pakistani’s CIA, would make drop-in visits lest anyone doubt the dangers were real.

To my surprise, however, Lucas was having none of this. Off he wandered into the depths of Peshawar’s bazaars, conspicuously blond and dreadlocked, then into Swat, giving the obligatory armed guards the slip, and even into the Tribal Agencies along the Khyber Pass to the Afghan border. I preferred to journey up to Chitral, where the high valleys are famous for charas and are home to far more laid-back folk, mostly Ismailis, but managed all the same to end up arriving back in Islamabad as the Red Mosque Siege erupted across downtown and militants threatened to overrun hotels and murder any westerner they found.

Suffice to say, I should probably not have been as surprised as I was when in winter of 2018 a message arrived from Lucas announcing that he was about to pick up an Afghan tourist visa in Samarkand then cross south over the Amu Darya for Mazar-i-Sharif armed only with a camera and a few blotters of Acid….

Somewhere around Balkh, on the edge of the desert, the drugs began to take hold….

The photos and interviews with farmers, malangs, and charsis in this book document a traditional cannabis culture that in its local variations once spanned much of Central Asia. Outside Afghanistan, however, in ancient heartlands of hashish such as Samarkand and Bukhara, these traditions of cultivation and consumption were wiped out during aggressive imperalist expansion into Central Asia by Russia from the late nineteenth century onwards, and in Xinjiang from the 1930s, first by the Kuomintang and then the Communist Party of China.

Paradoxically, by contrast, the half century of war and chaos unleashed by the Soviet invasion of Afghanistan in 1979 has served to preserve Afghan cannabis culture through a number of processes: cultivation expanded as a source of livelihood and to buy arms, and a strong state and central government of the kind that could implement effective eradication campaigns was unable to develop in Kabul. This and the Hindu Kush range itself have conspired – through those strange turns taken by history and geography – to see Afghanistan survive as a last bastion of cannabis traditions lost elsewhere, of old ways of sacramental and social use from which we in the west have much to learn, and indeed of critically endangered Cannabis biodiversity that the wider world is yet to do enough to preserve.

Here’s hoping this book is a further step toward their all flourishing once again….